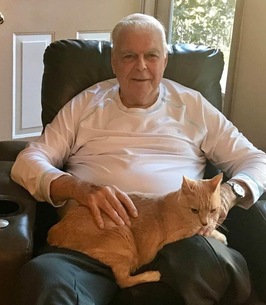 William (Bill) Kesselmeyer died peacefully surrounded by family on Thursday, December 1, 2022 at Merry Heart Senior Care in Succasunna, NJ, He was 92.
Bill, son of the late Amalie (Reu) and William Kesselmeyer was born in Newark, NJ on January 4, 1930. Bill was a longtime resident of Berkeley Heights before moving to Ponte Vedra Beach, FL to spend the majority of his retirement years. Bill returned to NJ in 2017 to be closer to family.

Bill served in the US Army reserves from 1958-1962. Bill was employed as a manager at NJ Bell for many years before retiring to Florida where he was a salesman for Surfside Pools and Spas. He enjoyed playing golf and tennis and was a loyal NY Giants fan.

Services will be private under the direction of the Valley Memorial Funeral Home 1012 Valley Rd., Gillette, NJ. For more information and online condolences visit valleymemorialfuneralhome.net.